East Isles Re provides insurance to employers for participation in group captive programs. Group captive programs are a versatile solution for employers wanting more transparency and control over their employee health plan. They offer small and midsize businesses a way to share an additional layer of risk.

Here are some frequently asked questions about captives:

What is a captive?

No, the concept of self-insuring risk goes back to the 1500s, when ship owners pooled their financial resources to cover ships and cargo lost at sea. In the 1800s, owners of New England textile mills entered into cooperative arrangements to share risk when fire insurance became unaffordable due to frequent fires.

The captive concept was born in the 1950s, when large factories and steel mills in the U.S. faced rising insurance premiums. Rather than pay sky-high rates, a steel mill in Ohio sought a creative solution.

The mill’s insurance broker launched a new insurance company, called the Steel Insurance Company of America, that was owned and operated by the steel manufacturer. It issued an insurance policy to its parent company. The steel mill already owned a “captive” mine that provided iron ore only for its factory, so the name was applied to the new “captive” insurance company.

The broker also started the first captive insurance management company in Bermuda, where regulations, at the time, were more favorable. Bermuda was one of the first countries to enact legislation that allowed captive insurers to be formed there. Today, captives are a multibillion dollar business that is more than 50 years old. There are more than 7,000 captives worldwide.

What does a captive insurer do?

A captive generally functions like a regular commercial insurer by:

Today, the vast majority of Fortune 500 companies own captives for their liability, workers comp, and other risks. Major universities and hospitals use captives to insure malpractice claims. Forming a captive insurer can require a great deal of capital and time, so historically it has been the realm of large corporations.

Can small to midsize companies use captives?

Yes. Today there are flexible options, like rent-a-captives and group captives, that allow companies to avoid the time and expense of creating their own captive and instead, join an existing captive. Companies like East Isles Re offer segregated account programs, or “protected cell” captives, as a turnkey solution. The segregated account program “rents” its services and established legal structure to clients who wish to join a captive program, but don’t want to invest in and own their own insurance company.

What is a group captive?

Single-parent captives have only one owner. Group captives, on the other hand, have multiple owners/participants. 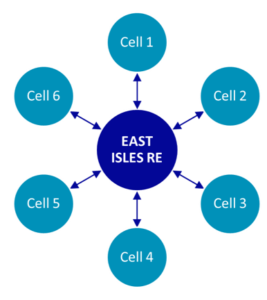 A legal document called the Segregated Account Program Agreement (SAPA) between East Isles Re and each participating company defines all the rights and responsibilities.

East Isles Re’s management maintains a high degree of control over the assets and liabilities linked to a segregated account. Joining an East Isles Re program is not meant to mirror the rights and control that a company would have in its own wholly owned captive. Rather, it is meant to be a simplified way to participate in a group captive program. The decreased level of control is the trade-off for the greatly simplified entry and exit process.

How does the relationship between the captive and participating companies work?

The relationship between East Isles Re and participating companies is governed by a document, called the Segregated Account Program Agreement (SAPA). The SAPA defines the rights and obligations of each member for the particular captive program in which it is participating. It also describes all the services that East Isles Re provides and how important details, such as funding, distributions, fee, and investments, are handled.